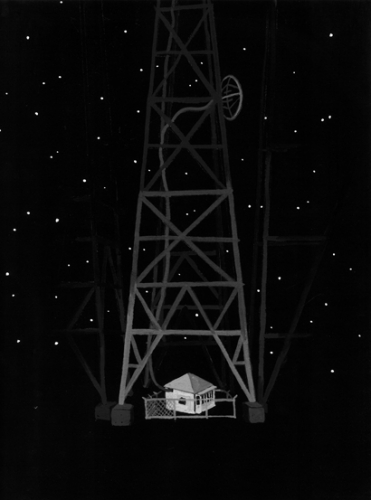 "William Blake was commissioned in 1795 to create a series of framing images around the printed text of poet Edward Young’s most famous work, “Night Thoughts.” This epic poem in “nine nights” is a nocturnal meditation on the mysteries of death and immortality. 537 watercolors were commissioned and 43 of the designs were used in an edition engraved and published in 1797. A few copies were colored by hand, purportedly at least one by Blake himself. Coincidentally there is a festival in Hinduism—the Navratri—which is known as the festival of nine nights. It honors various goddesses, particularly the wrathful goddess Durga, in the belief that strength to overcome evil and protect the weak are attributes of feminine energy. The number nine also represents the nine day war between Rama and Ravana in the Ramayana. Peter Lamborn Wilson has also drawn my attention to the book, Nine Dayak Nights, by W. R.Geddes, which examines the nine-night headhunting ritual of the Dayak tribe in the Malaysian state of Sarawak in Borneo. Seeing some of the Blake images at an exhibition at the Metropolitan Museum sparked this writing after 9/11, in addition to the mystical ritual sense of the number “nine” as being a period—a time-frame—of transition, Donna Dennis became the William Blake of the project, the writing of these poems also inspired by her range of images." - Anne Waldman May 2008


"I was home, five blocks from Ground Zero, when the planes hit the towers. When I returned, two weeks later, I could not work. Instead, I sat in my studio and wrote and wrote in my journal. One night, I got up and, distracted, walked to the front of my studio and looked for the familiar red light atop the antenna on the north tower. I saw only the black night sky. For a moment, I had forgotten, and the reality was crushing. I was filled with longing and I imagined a telescope, searching for the tower – the towers – and finding them ... a constellation in the night sky. About ten years ago, I bought land upstate on the top of a hill. I began to spend hours watching the sunset and the first stars begin to appear–one and then another and another until the sky was crowded with their light. In the weeks after 9/11, I found comfort in the small cabin under the stars; its simplicity reminded me of my pioneer ancestors and the way they had lived with danger ever present, in a way I had not. The following summer, for an exhibition that was set to open on the first anniversary of the attack, I was asked to create a “poetic response” to the idea of a memorial. As I worked, I thought of the telescope finding not only the tower/constellation, but other stars that had been named for everyone who was lost. I imagined the footprints of the towers filled with water, reflecting the night sky. And the great mound of tangled buildings became a hill on which grasses and wildflowers over time would grow. The telescope would be there, at the top. When Anne Waldman– we have known one another since the early 60s – asked me in 2002 to collaborate, we both began with 9/11. It was so recent. She liked my idea for a “poetic” memorial and we went on from there. Anne works more quickly than I do. It took me nearly three years to complete my gouache images. Anne’s first version was written before the end of 2002. By the time she revised her work, in the summer of 2005, some of the early references to 9/11 were gone, and in their place were new ones: night migrations of confused birds, galaxies, little houses, plate shifts, dark matter, and “. . . let’s go to the hilltop of ‘thinking’ & thrust the torchlight on ourselves, celestial pointillist.. ." - Donna Dennis June 2008