"Donna Dennis’s Tourist Cabins on Park Avenue create a thought-provoking juxtaposition between the humble structures and the affluent residences for which the boulevard is known," said Commissioner Adrian Benepe. "While New York bustles along Park Avenue, the small, self-sufficient buildings are isolated in the median and, complete with a satellite dish, suggest a hunger for communication and a connection with the outside world."

The first tourist cabin-sculptures I made were inspired not only by childhood experiences on family trips but also by the way a small building can stand in for a human presence. Each time I have exhibited my cabin-sculptures, the setting—City Hall Park or a river in Aberdeen, South Dakota—has added new meaning. When I thought of placing these tiny houses amid the glass and concrete and noise and bustle of Park Avenue, the constellation-filled ceiling of Grand Central Terminal inspired me to add a satellite dish that would somehow connect them with distant space and the peace and quiet of the star-filled summer night.

My first cabin-inspired sculptures were shown at Holly Solomon Gallery in 1976. Over the years, other cabin-sculptures, roughly ¾ scale, have been exhibited indoors at the Whitney Museum, the Walker Art Center, the Hirshhorn Museum in Washington, the ICA in London, and the Venice Biennale. Outdoors, they have been seen in such varied settings as New York's City Hall Park, the Storm King Art Center, the Neuberger Museum and on Moccasin Creek in Aberdeen, South Dakota where they were afloat. On Park Avenue, a few blocks above Grand Central Terminal, and in view of the Waldorf Astoria, the cabins will have their most dramatic, provocative setting to date. 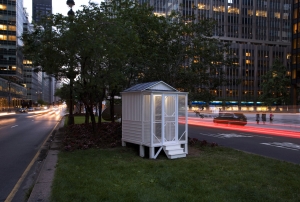