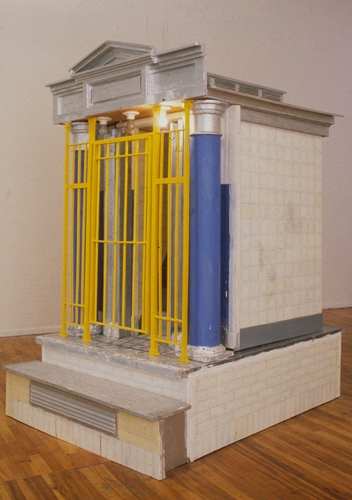 As the newly appointed assistant curator at the Contemporary Arts Center in Cincinnati in 1987, one of my first assignments was to write the wall texts for "Standing Ground: Sculpture by American Women." Donna Dennis was one of the fifty artists included in the exhibition. When her Skowhegan Stairway (1982-83; Fig. 1) arrived at the gallery, it looked like a demolished shed. There were no directions for its assembly, and it took our entire crew to install it. As our preparator cursed the day "some idiot gave this woman a saw and the idea that she could build anything," I charged him to find someone with traditional skills who could build something so beautiful. He asked me to remind him about that when it fell on me. Skowhegan Stairway never fell, and I visited it every day. I would sit against the wall opposite the piece, listen to the crickets that sounded from its hidden tape player, and be glad that Dennis had had the courage to build it.