Coney Night Maze is a complex sculptural installation fourteen feet in height that draws inspiration from the maze of layered fences, gates, ramps and barriers that are nestled among the I-beams and columns on the underside of the Cyclone roller coaster at Coney Island. Two small booths, lit from within, inhabit the screen-like corridors of fencing that accrued over time, filling an area that had originally been designed to be open and welcoming. On one side an ascending track vanishes into the darkness and then is found again, descending in the distance to skim the edge of a rough rock wall studded with bolts, straps, and other reinforcements, which runs the twenty-seven foot length of the work. From time to time a car is faintly heard traveling on a distant track.

Beginning with the early "Hotel" series (1972–74) and Tourist Cabin Porch (Maine) (1976), I have always seen my work as representing stopping places, points of passage on a metaphorical journey through life. My early subway-inspired works led me to imagine exploring dark, subterranean, or subconscious realms; a track or river that divided again and again, allowing for infinitely expanding possibilities. Deeply affected by the women’s movement of the early 1970s, with its potential for recasting the entire language of art, I imagined my Deep Station (1985) to be a place deep in the center of the earth where the tectonic plates are shifting, effecting a realignment that represented a shift of consciousness. Another theme has been that of locked passageways, dark tangled obstacles, and being forced to find an alternative way or new direction. Themes of death and the underworld appear throughout.

Coney Night Maze represents thirteen years of labor under the shadow of 9/11 and in the wake of Hurricane Sandy, which washed away the portion of the Cyclone that inspired the work. The piece continues my exploration the underworld, but with a new conclusion. The maze—with its dead ends, locked gates and mute signs providing no words of direction—at first creates a sense of dislocation, confusion, or a feeling of being caught. The two booths stand witness but give no aid. How does one escape? How does one reach the track and its promise of a ride? The peeled-back fence, leading to the interior of the work, suggests that one can abandon the maze entirely and make a new way, a new entrance. Only then can one reach the track and be lifted up and out, out past the ancient rock wall that marks deep geologic time, out and up through darkness into the night sky, the Milky Way, the stars, deep space, eternity. 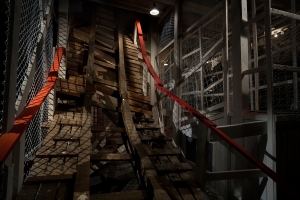 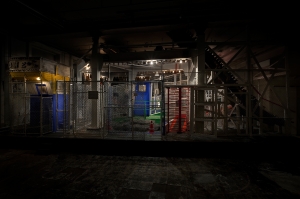 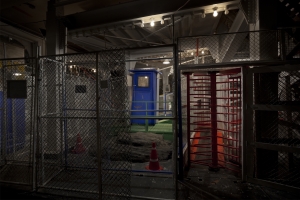